ENCORE: Here’s to a long life – which, on average, is longer today than it was a century ago. How much farther can we extend that ultimate finish line? Scientists are in hot pursuit of the secret to longer life.

The latest in aging studies and why there’s a silver lining for the silver-haired set: older people are happier. Also, what longevity means if you’re a tree. Plus, why civilizations need to stick around if we’re to make contact with E.T.

And, how our perception of time shifts as we age, and other tricks that clocks play on the mind.

This encore podcast was first released on July 29, 2014

You can listen to this and other episodes at http://radio.seti.org/, and be sure to check out Blog Picture Science, the companion blog to the radio show.
Posted by Cloudymidnights at 1:53 PM No comments:

NASA's AIM spacecraft has spotted electric-blue clouds forming over Antarctica.  These are noctilucent clouds (NLCs) and their apparition marks the beginning of the 2014-2015 season for southern NLCs.  By the second week of December, Antarctica could be blanketed in electric blue.

Visit http://spaceweather.com for more information and updates.
Posted by Cloudymidnights at 1:34 PM No comments:

Young Volcanoes on the Moon

The Moon might not be as dead as it looks. Researchers using NASA's Lunar Reconnaissance Orbiter have found signs of geologically-recent volcanic eruptions dotting the lunar landscape.

The complete article can be found here: http://science.nasa.gov/science-news/science-at-nasa/2014/24nov_imps/

A companion video is posted below and can also be viewed at: https://www.youtube.com/watch?v=53TGz30Z1sM&feature=youtu.be

License: Standard YouTube License
Posted by Cloudymidnights at 6:31 AM No comments:

ENCORE: There are many kinds of islands. There’s your iconic sandy speck of land topped with a palm tree, but there’s also our home planet – an island in the vast seas of space. You might think of yourself as a biological island … until you tally the number of microbes living outside – and inside – your body.

We go island hopping, and consider the Scottish definition of an island – one man, one sheep – as well as the swelling threat of high water to island nations. Also, how species populate islands … and tricks for communicating with extraterrestrial islanders hanging out elsewhere in the cosmos.

This encore podcast was first released on January 9, 2012

You can listen to this and other episodes at http://radio.seti.org/, and be sure to check out Blog Picture Science, the companion blog to the radio show.
Posted by Cloudymidnights at 8:45 AM No comments:


Softpedia recently published an article regarding Distro Astro which is a Linux distribution designed for those with an interest in astronomy.

Here is the URL for the article - http://news.softpedia.com/news/Distro-Astro-3-0-Is-an-OS-Designed-For-People-Fascinated-by-Astronomy-Screenshot-Tour-465174.shtml

And here is the URL for the Distro Astro site - http://www.distroastro.org/

I haven't tried Distro Astro Linux yet, and it will be some time before I get a chance. If you happen to be using it or eventually start using it, then feel free to share you experiences in the comments section.

Cheers ~ Jim Cox
Posted by Cloudymidnights at 11:46 AM No comments:

Back for a second trip across the face of the Sun, old sunspot AR2192 is growing again and crackling with M-class solar flares.  The active region has an unstable magnetic field that harbors energy for even stronger X-flares. Future eruptions could affect Earth as the sunspot turns toward our planet in the days ahead.

Check http://spaceweather.com for updates.
Posted by Cloudymidnights at 2:45 PM No comments:

In the century and a half since Charles Darwin wrote his seminal On the Origin of the Species, our understanding of evolution has changed quite a bit. For one, we have not only identified the inheritance molecule DNA, but have determined its sequence in many animals and planets.

You can listen to this and other episodes at http://radio.seti.org/, and be sure to check out Blog Picture Science, the companion blog to the radio show.
Posted by Cloudymidnights at 8:59 AM No comments:


The Rosetta Mission's Philae probe has landed on Comet 67P/Churyumov-Gerasimenko.

Up to date information can be found at: http://rosetta.esa.int/ 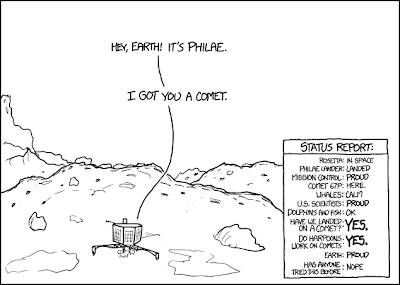 Check the following URL for updates to this xkcd strip: http://xkcd.com/1446/

Credit: Randall Munroe
Posted by Cloudymidnights at 12:42 PM No comments:

Big Picture Science for Monday 10 November 2014 - Skeptic Check: Are You Sure You're Sure?

Big Picture Science - Skeptic Check: Are You Sure You're Sure?

Nuclear fission powers the Sun. Or is it fusion? At any rate, helium is burned in the process, of that you are certain. After all, you read that article on astronomy last week*.

Find out why wrongness is the by-product of big brains and why even scientists – gasp! – are not immune. Plus, a peek into the trash bin of history: the biggest scientific blunders and the brighter-than-bright brains that made them. Including Einstein.

*Oh, and the Sun burns hydrogen to produce helium. But then, you knew that.

You can listen to this and other episodes at http://radio.seti.org/, and be sure to check out Blog Picture Science, the companion blog to the radio show.
Posted by Cloudymidnights at 9:17 AM No comments:

MARTIAN METEOR SHOWER: NASA and European spacecraft have detected evidence of a "spectacular" meteor shower on Mars caused by the close approach of Comet Siding Spring last month.  If a human had been standing on the Red Planet at the time, they might have seen thousands of meteors per hour followed by a widespread yellow afterglow that lasted for days.  Visit http://spaceweather.com for more information.

X-FLARE!  Active sunspot AR2205 produced a potent X1-class solar flare on Nov. 7th, causing a strong HF radio blackout on the dayside of our planet. More X-flares are in the offing as the sunspot turns toward Earth this weekend.  Visit http://spaceweather.com for updates.
Posted by Cloudymidnights at 3:37 PM No comments:

NASA Rocket Redefines What Astronomers Think of as Galaxies

Findings from a NASA rocket are redefining what scientists think of as galaxies. Galaxies may not have a set boundary of stars, but instead stretch out to great distances, forming a vast, interconnected sea of stars.

The complete article can be found here: http://science.nasa.gov/science-news/science-at-nasa/2014/06nov_ciber/
Posted by Cloudymidnights at 4:40 PM No comments:

Crackling with M-class solar flares, an active sunspot is emerging over the sun's northeastern limb.  The new region, numbered AR2205, has produced multiple CMEs in the past 48 hours.  So far Earth is outside the line of fire, and the solar storm clouds are sailing wide of our planet. This could change, however, as the sunspot turns toward Earth in the days ahead.

Visit http://spaceweather.com for more information and updates.
Posted by Cloudymidnights at 12:31 PM No comments:

How to Land on a Comet

The European Space Agency's Rosetta spacecraft is about to attempt something "ridiculously difficult" - landing a probe on the surface of a speeding comet.

The complete article can be found here: http://science.nasa.gov/science-news/science-at-nasa/2014/03nov_rosettalanding/

A companion video is posted below and can also be viewed at: https://www.youtube.com/watch?v=D5iyZTXiX78&feature=youtu.be

ENCORE: The world is a noisy place. But now we have a better idea what the fuss is about. Not only can we record sound, but our computers allow us to analyze it.

Bird sonograms reveal that our feathery friends give each other nicknames and share details about their emotional state. Meanwhile, hydrophones capture the sounds of dying icebergs, and let scientists separate natural sound from man-made in the briny deep.

Plus, native Ohio speakers help decipher what Neil Armstrong really said on that famous day. And, think your collection of 45 rpm records is impressive? Try feasting your ears on sound recorded before the Civil War.

This encore podcast was first released on August 5, 2103.

You can listen to this and other episodes at http://radio.seti.org/, and be sure to check out Blog Picture Science, the companion blog to the radio show.
Posted by Cloudymidnights at 9:29 AM No comments: