NEW MAPS OF THE SOUTH ATLANTIC ANOMALY: Scientists have long known that our planet's inner Van Allen Belt dips down toward Earth over South America, creating a zone of high radiation known as the South Atlantic Anomaly.  A new study, just published in the AGU journal Space Weather Quarterly, reveals that the anomaly is moving and that it varies with seasons in a way that researchers don't fully understand.

Visit today's edition of Spaceweather.com for the full story. 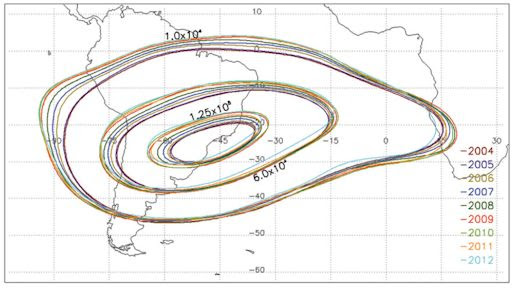 HIGH-SPEED SOLAR WIND ENGULFS EARTH: As predicted, a high speed solar wind stream has surrounded Earth and it is buffeting our planet's magnetic field on Sept. 28th. Bright auroras have been sighted around the Arctic Circle in response to G2-class geomagnetic storms. This is a broad stream of solar wind, and its influence could persist for 2 or 3 days.

Visit Spaceweather.com for updates.
Posted by Cloudymidnights at 10:16 AM No comments:

BIG CORONAL HOLE TURNS TOWARD EARTH: A large coronal hole is turning toward Earth, and it is spewing a stream of high-speed solar wind. NOAA forecasters expect the stream to reach our planet on Sept. 28-29 with a 50% chance of G1-class geomagnetic storms when it arrives. Stay tuned to Spaceweather.com for the onset of auroras.
Posted by Cloudymidnights at 4:04 PM No comments:

ENCORE: Are you skeptical?  Sure, you raise an eyebrow when some Nigerian prince asks for your bank numbers, or when a breakfast cereal claims that it will turn your kid into a professional athlete overnight.

But what do you really know about the benefits of organic milk?  Or the power of whitening ingredients in your toothpaste?  How credible is what you read on Twitter?

Today, information overwhelms us, and the need to keep our skeptical wits about us has never been greater.  We follow Seth around as he faces the daily onslaught of hype and hokum.

This encore podcast was first released on August 17, 2015

You can listen to this and other episodes at http://bigpicturescience.org/, and be sure to check out Blog Picture Science, the companion blog to the radio show.
Posted by Cloudymidnights at 12:23 PM No comments:

How to See the New Chinese Space Station

HOW TO SEE THE NEW CHINESE SPACE STATION: Amateur astronomers have spotted China's new Earth-orbiting space station, which was launched just last week.  Although it is only a fraction of the size of the ISS, the Tiangong-2 is visible to the naked eye from dark-sky sites. Visit today's edition of Spaceweather.com for observing tips and a video of the outpost gliding across the night sky.

NEW! RADS ON A PLANE: Spaceweather.com is now reporting data you won't find anywhere else: Regular measurements of cosmic radiation at aviation altitudes. When you visit the home page, scroll down to the section entitled "Cosmic Rays in the Atmosphere" for the latest data at 25,000 ft and 40,000 ft
Posted by Cloudymidnights at 3:52 PM No comments:

HERE COMES THE SOLAR WIND: The Arctic Circle is about to turn green. Forecasters say there is a good chance of bright auroras around the poles on Sept. 20th when a solar wind stream engulfs Earth's magnetic field. Researchers have long known that auroras favor equinoxes. The timing of the  stream could scarcely be better as it is expected to arrive only two days before the beginning of northern autumn.

Visit http://spaceweather.com for more information and updates.
Posted by Cloudymidnights at 9:50 AM No comments:

Birds do it, bees do it, but humans may not do it for much longer.  At least not for having children.  Relying on sex to reproduce could be supplanted by making babies in the lab, where parents-to-be can select genomes that will ensure ideal physical and behavioral traits.

Men hoping to be fathers should act sooner rather than later.  These same advancements in biotechnology could allow women to fertilize their own eggs, making the need for male sperm obsolete.

Meanwhile, some animals already reproduce asexually.  Find out how female African bees can opt to shut out male bees intent on expanding the hive.

Will engineering our offspring have a down side?  Sex creates vital genetic diversity, as demonstrated by evolution of wild animals in urban areas.  Find out how birds, rodents and insects use sex in the city to adapt and thrive.

You can listen to this and other episodes at http://bigpicturescience.org/, and be sure to check out Blog Picture Science, the companion blog to the radio show.
Posted by Cloudymidnights at 11:50 AM No comments:

Spooky Eclipse of the Harvest Moon

SPOOKY ECLIPSE OF THE HARVEST MOON:  According to folklore, this Friday's full Moon is the Harvest Moon.  For many observers, the usual luster of the silver orb will be dimmed by a spooky shadow as the Moon experiences a "penumbral lunar eclipse."

Visit http://spaceweather.com for visibility maps and a cool animation.

EARTH'S MAGNETIC FIELD CAUGHT RINGING LIKE A BELL:  This week a magnetic observatory in Norway recorded almost pure sinusoidal oscillations in Earth's magnetic field--a phenomenon unlike normal geomagnetic storms. The magnetic "ringing" was accompanied by equally sinusoidal electric currents flowing through the ground. The data and underlying physics are highlighted on today's edition of http://spaceweather.com.
Posted by Cloudymidnights at 9:09 PM No comments:

Big Picture Science for Monday September 12, 2016 - The Evolution of Evolution

ENCORE: Darwinian evolution is adaptive and slow … millennia can go by before a species changes very much. But with the tools of genetic engineering we can now make radical changes in just one generation. By removing genes or inserting new ones, we can give an organism radically different traits and behaviors. We are taking evolution into our own hands.

It all began with the domestication of plants and animals, which one science writer says created civilization. Today, as humans tinker with their own genome, is it possible we will produce Homo sapiens 2.0?

Also, what happens to those species who can’t control their destiny? How climate change is forcing the biggest genetic reshuffling in recorded history.

This encore podcast was first released on May 04 2015

Spherical Images of Earth from the Edge of Space

CHANCE OF STORMS:  A solar wind stream traveling ~550 km/s is expected to engulf Earth's magnetic field during the late hours of Sept. 11th.  Its arrival could spark polar geomagnetic storms and high-latitude auroras on Sept. 11th and 12th. Visit http://spaceweather.com for updates.

SPHERICAL IMAGES FROM THE EDGE OF SPACE:  Last week, a pair of space weather balloons were launched from opposite sides of the USA to measure cosmic rays in the atmosphere.  During the flights, a spherical camera captured unique images of Earth from the stratosphere. Click here to experience a fully-interactive, spinnable, zoomable view of the Atlantic Coast from an altitude of 108,000 feet.  First-look results from the radiation experiment may be found on http://spaceweather.com
Posted by Cloudymidnights at 9:36 PM No comments:

Asteroid buzzes Earth, then flies by the Moon

ASTEROID DOUBLE FLYBY:  On Sept. 7th, a newly discovered asteroid about the size of a large grey whale flew over the south pole of Earth only 25,000 miles away. For scale, that's only a few thousand miles above the orbits of typical geosynchronous satellites. After the Earth flyby, the space rock turned and headed in the general direction of the Moon, executing a wider flyby of 179,000 miles on Sept. 8th. Where will this asteroid go next?  Visit http://spaceweather.com for answers and photos of today's encounter with Earth.

BRIGHT AURORAS:  A broad solar wind stream hit Earth on Sept. 1st, sparking a display of bright auroras around the Arctic Circle that is only now fully subsiding.  Did you miss it?  Browse our Aurora Photo Gallery for highlights.
Posted by Cloudymidnights at 7:30 PM No comments:

GEOMAGNETIC STORM: A G1-class geomagnetic storm is underway on Sept. 5th as Earth moves through a broad stream of solar wind. This is the same stream that sparked bright auroras around both poles (and some US states) over the weekend.

Visit Spaceweather.com for photos and updates.

EERIE SOUNDS FROM AURORAS ON JUPITER: On Aug. 27th, NASA's Juno spacecraft swooped low over the poles of Jupiter.  Not only did the spacecraft snap incredible photos of the most powerful auroras in the solar system, but also it recorded some strange sounds.

Listen to them on today's edition of Spaceweather.com.

Posted by Cloudymidnights at 4:20 PM No comments:

Everyone knows that a big rock did in the dinosaurs, but smaller asteroids are millions of times more common and can also make a violent impact.   Yet unlike the bigger asteroids, we’re not tracking them.  Find out what we’d need to keep an eye on the size of space rocks such as that which exploded over Chelyabinsk, Russia.   And how an asteroid whizzed by Earth in late August 2016, only hours after it had been spotted.

Asteroids are the one natural disaster we can defend against, but an economist explains why humans are reluctant to invest in protection against “low probability, high impact” threats.

Also, how to authenticate that chunk of asteroid that you found in a field and NASA’s first ever return mission to an asteroid.  It plans to bring some fresh samples back to Earth.

You can listen to this and other episodes at http://bigpicturescience.org/, and be sure to check out Blog Picture Science, the companion blog to the radio show.
Posted by Cloudymidnights at 2:45 PM No comments:

WEEKEND AURORAS:  A stream of very fast moving (700 km/s) solar wind has surrounded Earth, sparking geomagnetic storms on Sept. 3rd. Bright auroras are being reported around the Arctic Circle, with sightings in some northern-tier US states as well.  Because this solar wind stream is wide, its influence could continue throughout the weekend.

Visit http://spaceweather.com for updates and photos of the ongoing display.
Posted by Cloudymidnights at 10:11 AM No comments: