WEIRD ATMOSPHERIC WAVE RIPPLES OVER CHINA: On Nov. 24th, a deep-rippling wave at the edge of space crossed the night sky above China. Eye-witnesses saw the airglow layer split in two, and at least one photographer captured beautiful images of the event.  It might be a type of exotic wave called a "mesospheric bore."

Visit Spaceweather.com to see the photos and learn more.

UNEXPECTED SOLAR FLARES: Catching forecasters off guard, a new sunspot (AR2615) has emerged and it is crackling with M-class solar flares. Minor radio blackouts are underway on Nov. 29-30 as pulses of UV and X-radiation ionize the top of Earth's atmosphere.  This is *not* a major space weather event, but it is a break from the sun's recent deepening quiet.
Posted by Cloudymidnights at 4:47 PM No comments:

NOCTILUCENT CLOUDS OVER ANTARCTICA: This just in from NASA's AIM spacecraft: The sky above Antarctica is glowing electric blue. A ring of bright noctilucent clouds has formed around the South Pole. The annual apparition of these clouds is one of the earliest on record, and may hint at the workings of climate change. 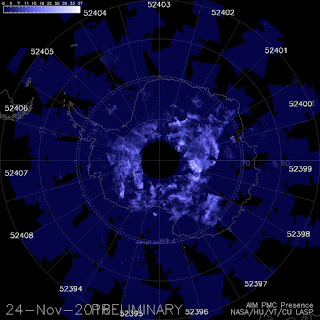 Big Picture Science for Monday November 28, 2016 - What Lies Beneath

Big Picture Science - What Lies Beneath

ENCORE: What you can’t see may astound you.  The largest unexplored region of Earth is the ocean.  Beneath its churning surface, oceanographers have recently discovered the largest volcano in the world – perhaps in the solar system.

Find out what is known – and yet to be discovered – about the marine life of the abyss, and how a fish called the bristlemouth has grabbed the crown for “most numerous vertebrate on Earth” from the chicken.

Plus, the menace of America’s Cascadia fault, which has the potential to unleash a devastating magnitude 9 earthquake.

Follow Dr. Sager’s voyage back to Tamu Massif in Fall 2015.

You can listen to this and other episodes at http://bigpicturescience.org/, and be sure to check out Blog Picture Science, the companion blog to the radio show.
Posted by Cloudymidnights at 9:26 AM No comments:

A Big Hole in the Sun's Atmosphere

RETURN OF A BIG CORONAL HOLE:  At the end of October, a hole in the sun's atmosphere lashed Earth's magnetic field with solar wind, sparking moderately-strong geomagnetic storms and almost a full week of Arctic auroras.  News flash:  It's back. The same "coronal hole" is turning toward Earth again. Forecasters expect the solar wind to reach Earth during the late hours of Nov. 22nd with minor G1-class geomagnetic storms possible on Nov. 23rd.

Visit Spaceweather.com for more information and updates.
Posted by Cloudymidnights at 5:53 PM No comments:

Everyone talks about the weather but no one does anything about it. Not that they haven’t tried.  History is replete with attempts to control the weather, but we’d settle for an accurate seven-day forecast.

Find out how sophisticated technology might improve accuracy, including predicting the behavior of severe storms.  Plus, the age when “weather forecast” was a laughable idea, but why 19th century rebel scientists pursued it anyway.

Also, a meteorologist who was falsely claimed to have “solved” the mystery of the Bermuda Triangle, and a climate scientist recounts the history of trying to control the weather, and the potential future of geoengineering.

You can listen to this and other episodes at http://bigpicturescience.org/, and be sure to check out Blog Picture Science, the companion blog to the radio show.
Posted by Cloudymidnights at 10:09 AM No comments:

SUNSPOT CYCLE AT LOWEST LEVEL IN 5 YEARS:  Sunspot counts have reached their lowest level in 5 years, a clear sign that Solar Minimum is approaching.  Contrary to popular belief, Solar Minimum is neither dull nor uneventful. Instead, space weather changes in interesting ways. Today's edition of Spaceweather.com lists some of the changes we can expect, including one that is happening right now: a measurable increase in atmospheric cosmic rays. Check it out.
Posted by Cloudymidnights at 6:08 AM No comments:

Once again the aliens have landed … in theaters.  It’s no spoiler to say that the latest cinematic sci-fi, Arrival, involves extraterrestrials visiting Earth.

You can listen to this and other episodes at http://bigpicturescience.org/, and be sure to check out Blog Picture Science, the companion blog to the radio show.
Posted by Cloudymidnights at 9:03 AM No comments:

BIGGEST FULL MOON IN ALMOST 70 YEARS:  The full Moon of Nov. 14th will be the biggest and brightest in nearly 70 years. Today's edition of Spaceweather.com offers observing tips and explains why not all full Moons are the same.

ROCKET PHOTOBOMBS AURORA OUTBURST:  A high-speed stream of solar wind is buffeting Earth's magnetic field this weekend, causing bright auroras around the Arctic Circle.  While watching the light show last night in Sweden, a group of tourists witnessed a strange apparition caused by a passing rocket.

Visit Spaceweather.com to see what happens when a rocket engine photobombs the Northern Lights.
Posted by Cloudymidnights at 1:25 PM No comments:

TARDY CME SPARKS BRIGHT AURORAS:  Arriving later than expected, a CME brushed against Earth's magnetic field on Nov. 9th, sparking a bright display of auroras seen mainly from Alaska. More auroras are in the offing as a new solar wind stream heads in our direction.  Estimated time of arrival: Nov. 11-12.

Visit http://spaceweather.com for pictures of the Nov. 9th auroras and updates about the approaching solar wind stream.
Posted by Cloudymidnights at 5:10 PM No comments:

Big Picture Science for Monday November 07, 2016 - And To Space We Return

Big Picture Science - And To Space We Return

ENCORE: Earth may be the cradle of life, but our bodies are filled with materials cooked up billions of years ago in the scorching centers of stars. As Carl Sagan said, “We are all stardust.” We came from space, and some say it is to space we will return.

Discover an astronomer’s quest to track down remains of these ancient chemical kitchens. Plus, a scientist who says that it’s in our DNA to explore – and not just the nearby worlds of the solar system, but perhaps far beyond.

But would be still be human when we arrive? Hear what biological and cultural changes we might undergo in a multi-generational interstellar voyage.


This encore podcast was first released on June 8, 2015

You can listen to this and other episodes at http://bigpicturescience.org/, and be sure to check out Blog Picture Science, the companion blog to the radio show.
Posted by Cloudymidnights at 7:00 PM No comments:

SUN HURLS PLASMA CLOUD TOWARD EARTH:  Yesterday, Nov. 5th, a magnetic filament on the sun became unstable and erupted. The blast opened a fiery canyon in the sun's atmosphere and hurled a CME toward Earth.  According to NOAA models, the plasma cloud could strike Earth's magnetic field on Nov. 8th, triggering G1-class geomagnetic storms and auroras around the poles.

Posted by Cloudymidnights at 6:42 PM No comments: