SOLAR ECLIPSE IN AFRICA: On Thursday, Sept.1st, the Moon will pass in front of the sun over Africa, covering as much as 97% of the solar disk. Observers in 50 countries will experience a partial eclipse, while others will witness an annular "ring of fire."

Visit http://spaceweather.com for more information and real time images as the eclipse unfolds.
Posted by Cloudymidnights at 2:05 PM No comments:

COSMIC RAYS IN THE ATMOSPHERE: Spaceweather.com's high-altitude balloon program has just released another six months of radiation data. They show that cosmic rays in Earth's atmosphere are intensifying, continuing a trend that began more than a year ago.  Visit Spaceweather.com to learn why and to find out about the down-to-Earth consequences of cosmic radiation.

CHINESE QUANTUM PHYSICS SATELLITE: Did you know? Earlier this month, China launched a quantum physics satellite designed to beam un-hackable messages to Earth and test exotic theories such as quantum teleportation. An amazing photo featured on today's edition of Spaceweather.com shows the quantum satellite at work. Check it out.
Posted by Cloudymidnights at 1:40 PM No comments:

Got aches and pains?  Critters in the Cretaceous would have been sympathetic.  A new study reveals that painful arthritis plagued a duck-billed dinosaur.  Scientists impressively diagnosed the animal’s condition without a house call by examining its 70 million-year old bones.

The technology we use for health diagnoses are becoming so sophisticated, some people are prompted to bypass doctors and do it themselves.  Meet a man who had his genome sequenced and then had all 70 gigabytes delivered directly to him so that he could gauge his genetic health.

Also, practitioners who are trying to improve cognitive function using a battery and a few wires.   Find out the possible risks and benefits of DIY brain stimulation.

You can listen to this and other episodes at http://bigpicturescience.org/, and be sure to check out Blog Picture Science, the companion blog to the radio show.
Posted by Cloudymidnights at 9:15 PM No comments:

Spectacular Conjunction of Venus and Jupiter

SPECTACULAR CONJUNCTION: This weekend, Jupiter and Venus are having a spectacular conjunction in the sunset sky. Separated by only a fraction of a degree, the two brightest planets almost look like they're going to touch. This heavenly meeting is easy to see from the southern hemisphere, but much more challenging from the north.

Visit http://spaceweather.com for more information and the latest images. 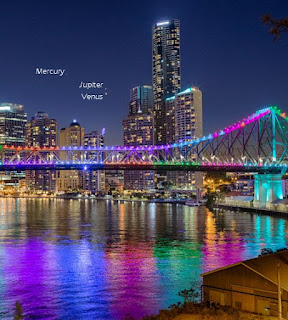 Auroras Mixing with Twilight around the Arctic Circle

AURORAS VS. TWILIGHT: A G1-class geomagnetic storm on Aug. 23-34 has sparked late summer auroras around the Arctic Circle, mixing twilight-blue with aurora-green.  It's a palette of rare beauty, which you can only see at this time of year.  Visit Spaceweather.com for photos and updates about the ongoing storm.

A SPACE WEATHER BALLOON OVER THE ANDES: Over the past three days, SpaceWeather.com and the students of Earth to Sky Calculus have launched multiple space weather balloons from sites spanning 3 countries, two continents, and more than 10,000 miles.  It's a giant radiation experiment to measure how well Earth's atmosphere protects us from cosmic rays.  A highlight so far comes from Chile, where a balloon was launched near the South Atlantic Anomaly. Radiation measurements have not yet been reduced, but photography of the space weather payload soaring more than 120,000 feet over the Andes is spectacular.

Visit Spaceweather.com for pictures and more information about this experiment.
Posted by Cloudymidnights at 5:44 PM No comments:

Big Picture Science for Monday August 22, 2016 - They Know Who You Are

Big Picture Science - They Know Who You Are

ENCORE: You’re a private person. But as long as you’re on-line and have skin and hair, you’re shedding little bits of data and DNA everywhere you go. Find out how that personal information – whether or not it’s used against you – is no longer solely your own. Are your private thoughts next?

A security expert shares stories of ingenious computer hacking … a forensic scientist develops tools to create a mug shot based on a snippet of DNA … and from the frontiers of neuroscience: mind reading may no longer be the stuff of sketchy psychics.

This encore podcast was first released on May 18, 2015

You can listen to this and other episodes at http://bigpicturescience.org/, and be sure to check out Blog Picture Science, the companion blog to the radio show.
Posted by Cloudymidnights at 9:37 AM No comments:

SPACE LIGHTNING OVER CHINA: While photographing the Perseid meteor shower on Aug. 13th, a sky watcher in China captured rare images of a "gigantic jet" leaping out of a thundercloud. The luminous purple and red structure stretched its tentacles almost to the edge of space before vanishing in full view of dozens of onlookers.

Visit http://spaceweather.com for photos and more information about this phenomenon.
Posted by Cloudymidnights at 11:01 AM No comments:

Big Picture Science - Are We Over the Moon?

When astronaut Gene Cernan stepped off the moon in 1972, he didn’t think he’d be the last human ever to touch its surface.  But no one’s been back.  Hear astronaut Cernan’s reaction to being the last man on the moon, the reasons why President Kennedy launched the Apollo program, and why Americans haven’t returned.

Now other countries – and companies – are vying for a bigger piece of the space pie. Find out who – or what – will be visiting and even profiting.  Will the moon become an important place to make money?

Plus, the moon landing was a great step for “a man,” and “men not machines” make space history.  But what about women?  More than a dozen were qualified for space flight in the early 1960s.  Hear from one of these original “Mercury 13,” and find out why NASA grounded them.


This postcast downloaded at: http://bigpicturescience.org/episodes/are-we-over-moon

You can listen to this and other episodes at http://bigpicturescience.org/, and be sure to check out Blog Picture Science, the companion blog to the radio show.
Posted by Cloudymidnights at 10:35 AM No comments:

ENCORE: There are few enduring truths, but one is that no one gets out of life alive. What’s less certain is what comes next. Does everything stop with death, or are we transported to another plane of existence? First-hand accounts of people who claim to have visited heaven are offered as proof of an afterlife. Now the author of one bestseller admits that his story was fabricated.

We’ll look at the genre of “heaven tourism” to see if it has anything to say about the possible existence of the hereafter, and why the idea of an afterlife seriously influences how we live our lives on Earth.

Also, a neurologist describes what is going on in the brain during near-death and other out-of-body experiences.

This encore podcast was first released on Monday 25 May 2015

You can listen to this and other episodes at http://bigpicturescience.org/, and be sure to check out Blog Picture Science, the companion blog to the radio show.
Posted by Cloudymidnights at 5:30 PM No comments:

PERSEID METEOR OUTBURST: Do you love the Perseid meteor shower?  This year, you will love it even more. Forecasters say the 2016 Perseids should be twice as active as usual, filling the sky with 200+ meteors per hour on peak nights between Aug. 11th and 13th.  This is happening because Earth is heading for an unusually rich stream of debris from parent comet Swift-Tuttle.

Visit http://spaceweather.com for sky maps, observing tips, and links to live webcasts of the Perseid outburst.
Posted by Cloudymidnights at 5:08 PM No comments:

The Sun Swallows a Comet

THE SUN IS SWALLOWING A COMET: One of the brightest sungrazing comets of the last 20 years is plunging toward the sun and vaporizing furiously. The icy visitor from the outer solar system may only have hours left to "live."

Visit http://spaceweather.com for photos and updates.
Posted by Cloudymidnights at 6:02 PM No comments:

SUMMERTIME AURORAS: As expected, a high-speed stream of solar wind (with a CME embedded in the flow) hit Earth's magnetic field during the late hours of Aug. 2nd.  The resulting G1-class geomagnetic storm sparked bright auroras across countries in Europe as well as several northern-tier US states.  The show might not be over. NOAA forecasters estimate a 55% chance of similar storms on August 3rd as Earth continues to feel the effects of the solar wind.

Visit http://spaceweather.com for photos and more information.
Posted by Cloudymidnights at 1:31 PM No comments: