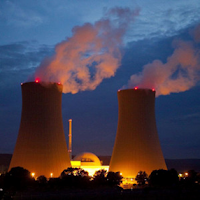 The nuclear threat is back, and the Doomsday Clock is almost at midnight. How did we end up here again? In the 1930s, German physicists learned that splitting the nuclei of heavy atoms could release tremendous amounts of energy. Such theoretical ideas became relevant when WW II began.

Today, we try to eliminate nuclear weaponry while exploiting the atom for peaceful uses, such as energy generation. But as the invasion of Ukraine shows, power plants can also be military targets. We lay out some of the questions that scientists and strategists are grappling with considering recent events.

You can listen to this and other episodes at http://bigpicturescience.org/, and be sure to check out Blog Picture Science, the companion blog to the radio show.

Get early access to ad-free versions of every episode by joining us on Patreon. Thanks for your support!

Posted by Cloudymidnights at 10:11 PM